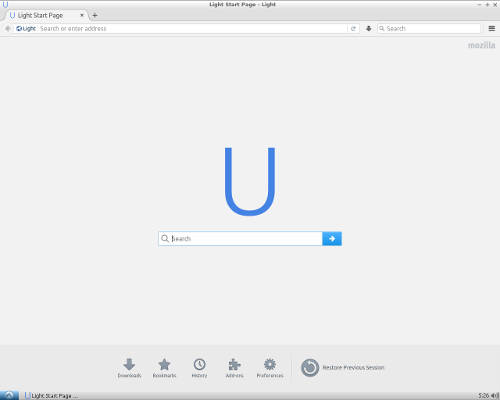 But, Light still has support for most Firefox themes, HTML5, JavaScript, Plug-ins like Adobe Flash, Java, and add-ons like NoScript, and Flash Block because Light is based on the latest version of Firefox. Light also has bookmarks, password save, history, tabs, private web browsing, text and page zooming, and other important features found in most web browsers.

In my experience, Light has been very reliable, and fast when I use it on Lubuntu 14 which is a Ubuntu Linux based operating system which uses LXDE as the desktop environment. My Linux based desktop computer has a Intel Core2Dou 1.86 GHz CPU, 1GB of RAM, 320 GB hard drive, and Nvidia GT 620 video card, and uses Lubuntu Linux 14.10 as its operating system.

Light uses under 200MB of RAM when 1 tab with the default homepage is open after I launch Light. Light also runs smoothly when a few tabs are open at once. It rarely crashes in Lubuntu in my experience.

If you notice there is a slowdown problem when typing text on website in Light, you can turn off “Check my spelling as I type” in the Advanced section of the Preferences of Light.

Light uses the same user interface as Firefox, so Light should be easy to learn how to use if you use Firefox before. A lot of the plug-ins like Flash, add-ons, and themes for Firefox work on Light. Light has private incognito web browsing, tab web browsing, History, History Delete options, full screen mode, add-ons, plug-ins, history, and many of the same features available on Firefox. The main user interface differences in Light’s user interface is its logo is a U instead of the Firefox Fox logo, and it has fewer buttons in its menus.

Some websites, extensions, plug-ins, and themes for Firefox may not work as well in Light because Light is missing some features which are in the regular Full version of Firefox. I recommend also having another web browser like Midori, Web/Epiphany, Firefox, Chrome,Chromium, Vivaldi, Opera, etc installed on your Linux PC because Light Firefox may not display some websites as good if Light is missing a feature which is needed to open the site correctly.

It is possible to install Light on the same Linux PC which you have Firefox already installed on. Light is available for both x86 and x64 builds for 32bit and 64bit operating systems.

Light Firefox is a slimmed down version of Firefox which is more lightweight and use less RAM than other web browsers. But, most Firefox extensions, add-ons, plug-ins, and themes work on Light Firefox. Most websites also are displayed correctly in Light.

You can download Light web browser, and learn more about it at https://sourceforge.net/projects/lightfirefox/

If you want to download the RPM Linux installer for light, you need to use a Linux based operating system with a web browser like Firefox to visit the SourceForge download site for Light.

Installing Light Firefox from the RPM File on a Debian Linux Based Operating System like Debian, Ubuntu, Linux Mint, etc.

Unfortunately, there does not seem to be a .Deb Debian version of the Light installer package, so you need to use a program called alien to install the rpm installer for Light in a Debian based operating system.

The Debian package file would be located in your Home folder when your RPM file is converted to deb is done converting.

Learn how to use Alien to convert RPM Linux packages to deb Linux packages, so you can install RPM packages in Debian, Ubuntu, Linux Mint and other Debian operating systems.

Light does not support automatic updates from the software updater desktop program found in some Linux based operating systems like Ubuntu. Users would need to manually download updates from its website, and install them manually from the RPM file, or Alien if you use a Debian based Linux Operating System. But, I notice Light updates its version of the program very quickly after Mozilla Firefox released an update for Firefox web browser.